The computer case contains all the hardware components of your PC. Inside you would find a motherboard, CPU, RAM, hard drive and maybe a DVD drive. Computer cases are available in a variety of different colours, shapes, sizes and materials. The style of the case is determined by the size of the motherboard and the role of the computer. Some of the common case styles which you may see are the traditional desktop case, more modern tower case or even the rack mounted server case.

Over the years computer cases have evolved becoming more compact, practical and stylish in design. It is now common to find cases equipped with front USB ports, memory card readers and headphone sockets. 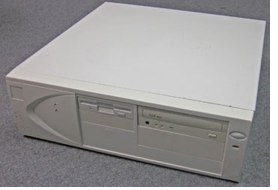 The desktop case was the ”original” computer case. It sat on your desk and saved space by allowing the monitor to be placed on top, with the keyboard and mouse in front. They were very large in size but practical at the time. A smaller slim line variation became available but was not very common as they were more expensive. The desktop case design eventually became superseded with the tower case. 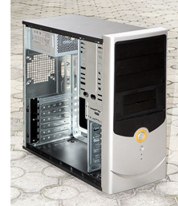 The midi tower case was and is still a very popular design. This tower case is large in size but versatile, offering space for upgradability and can either be placed on your desktop or be neatly tucked away below your desk. Usually the case has 3 or more 5.25" inch bays and can support multiple motherboard sizes.

Mini tower cases are common place in the home where size and practicality is more important than upgradability. They are smaller in size than the midi tower usually only having 1 or 2 drive bays and have limited internal space for expansion.

The full tower case was popular for cheap servers, power users and enthusiasts. It has a large amount of internal space and a number of drive bays making them a flexible case for upgrades. They can house multiple hard drives, DVD drives and other hardware. It’s not very common to see this type of case any more.

Media centre PC,s became popular with the release of Microsoft Windows XP Media Centre Edition. They were usually compact in size, smart in design, and looked natural in the living room or below your TV. Features may include front USB sockets, front video /audio out sockets and digital displays. The image is of a Hiper media centre case that’s about the same size as a DVD player.

The Shuttle design uses a small form factor motherboard to fit their custom cases. Always attractive to look at, setting them self apart from other competitors.

They became quite popular and other companies copied there design.

The rack mounted case is used in the server market. This type of case is designed to be a compact and standardized in size. The case is fixed to special rails so it can be easily slotted into a server rack. They are available in different heights measured in U,s. The picture below is of a 1 U server. 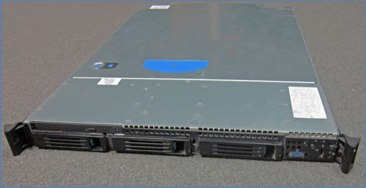 The all in one PC 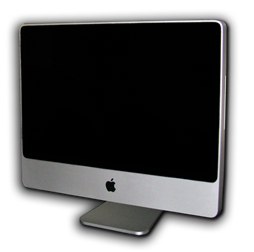 The all in one style case is becoming very popular in the home user market. The computer hardware and monitor have been combined into one enclosure. This computer case type is compact and smart to look at. However they are limited in their upgradeability and can be expensive to repair.

Do you think Ryzen has been a much needed success against Intel?